Lucy came to us through a friend of a friend. We needed someone to care for Maeve, our newborn baby, and Lucy needed work. She had cared for her mother who had recently died of cancer. Lucy was in her early 50s, her English was sparse, our Portuguese non-existent. I bought us an English/Portuguese dictionary, and at some point we discovered a mutual pidgin French.

Lucy had many job descriptions. In her family, Lucy was the unmarried sister; the slave who cared for dying parents, difficult nephews, gave solace to her sister and never spoke of the evils of her brother-in-law. They all lived in a house a few blocks from us. To our family, Lucy began as caregiver, morphed into Nanny/Housekeeper and ended as Honorary Mother/Grandmother. She sounds like a saint and we later found out, she may well be.

The largesse of Tony, the Brother-in-Law, provided Lucy with a small apartment in the family home. In exchange, Lucy lived a kind of Cinderella existence – only without the support of the mice. Her sister, Clotilde, did what she could for Lucy – but Clotilde had many burdens including her husband, three sons, and their interactions with The Law. When Lucy first came into our lives, Tony was up on a contempt of court charge. He’d put a third story onto his house without permits. He was ordered to remove the third story, didn’t, and didn’t show up for his court dates. I don’t know what happened officially, but eventually the third story was taken down.

Tony had a disposal business. He had trucks, bins and a property in Mississauga. He drove a Mercedes and used Grecian formula. He took two of his sons out of school at 14 to work in the business. What can I say?

But back to Lucy. She is about five feet tall. In some photos, Lucy’s face bears a strong resemblance to the Queen. Like the Queen, Lucy doesn’t indulge bad behavior. When the corner store was out of Portuguese bread, the owner suggested Lucy buy an Italian loaf, put it in a Portuguese bag and tell us it was Portuguese. We wouldn’t know the difference. Lucy walked out of the store and never went back. And she used strong, very strong, language when she told us the story. “He speaks cheap Portuguese.”

Lucy had spent time in ‘Lisboa’. She knew her English wasn’t great, but her Portuguese was expensive. By this time Lucy and Maeve had bonded into one unit, and Lucy would only speak to Maeve in Portuguese because she didn’t want her little girl growing up with a bad English accent.

When Maeve was three, the Vale of Tears descended. Lucy’s doctor ordered her to find a job easier on her varicose veins damaged legs. And so Lucy left our employ. But not our life. Maeve often spent weekends with her. They remained a unit. And Lucy got a job packing in a dress factory.

Life edged on. Lucy, the unmarried sister, was no longer needed to look after the three nephews, so the evil Tony evicted her. Clotilde could do nothing. The nephews did nothing. But…another family member had a house that needed a landlady. And so Lucy moved into the relative’s house, also in our neighborhood.

More time passes. We all drop in on each other, Maeve continues to grow and Christmas & birthdays become the main contact time. Except it’s Christmas and Lucy doesn’t answer her phone. I go over to her house. No sign of life. Maeve goes over. Also no sign. We both go over and pound on her door. Clotilde answers.

Lucy married??? No way. Lucy had a healthy distain for men based on what she’d seen in her home and neighborhood. And she was 67 years old for God’s sake.

Then out of the kitchen came Lucy.

“What are you doing here?”

Virgil is lovely. Lucy is blooming. And they look like two of the happiest gnomes you’ve ever seen. What a lovely Christmas surprise. But there was more. A few nights later, the happy couple come for dinner. Maeve and I drag Lucy away to show her mementos of her adopted daughter’s accomplishments. And Virgil tells Jon the Real Story of Lucy’s life.

Lucy and Virgil are first cousins. They fell in love when they were 15 or 16 but of course, with the first cousin thing, they couldn’t marry each other. Eventually Virgil married another woman, they moved to Victoria, B.C. and had children. Lucy became a Nun and went to work in Angola. When her mother became ill, her religious order released her from her vows and Lucy came to Canada. The “relative’s” house she lived in was in fact Virgil’s house – an investment he’d made.

A year ago, Virgil’s wife died. Well, being so old, there’s no chance that the first cousins would have children. And so they married – at last. And are living happily ever after. Virgil had a successful business so they have house, a back yard full of fig trees, a boat and they live near the ocean in Victoria.

Lucy. A nun? In Angola? A teenager embroiled in forbidden love?

Our Lucy. What a wonderful story. 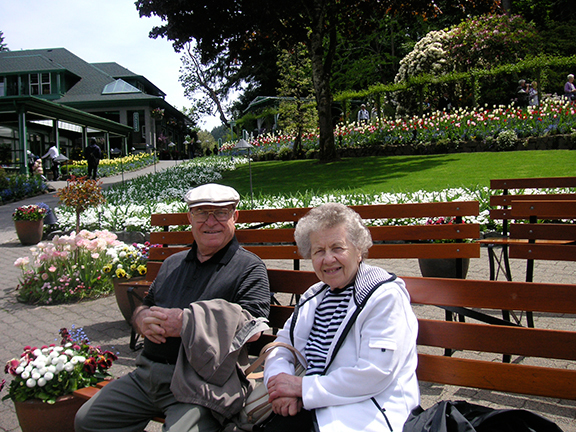 Some background irrelevant to the Christmas Surprise

An acquaintance of mine was an investigator with the Ministry of the Environment. He had run the investigation into the evil Tony’s disposal company. At one point there had been a high-speed chase — the wrong way up a one-way street with speed bumps. My friend, in a ministry car, pursued a disposal truck being driven by one of the nephews. He was caught when the truck didn’t clear a speed bump. Disposal truck became huge teeter-totter.

Then the Ministry found Tony had trucked hazardous waste to his Mississauga property. So many times that the Mississauga house was full and the land was covered not with fig trees, but with hazardous waste. Everywhere. Eventually, Tony went to jail.

But first – Toronto police planted a camera opposite one of Tony’s disposal trucks foolishly parked in the lot of a sleazy Parkdale variety store. It was a night of activity at that truck. When the footage was shown in court, it appeared that yes, the truck was illegally parked, but it was providing something a guy could lean back on while being serviced by a Parkdale hooker. Must have been an interesting few minutes in that courtroom.

Tony lost everything – including Clotilde. It came out Tony had a girlfriend. Now Clotilde lives in Lucy’s husband, Virgil’s, Toronto “investment” house, and every year Clotilde shows up with a homemade cake for Maeve’s birthday. Sent by Lucy.