My summer ended with a crash. My body is still here, all in one piece, but my brain seems to be sitting in *bubble wrap*. Everyone, almost everyone, says: to talk about it, write about it or…dum-de-dum-dum…P.T.S.D. awaits you. P.T.S.D. stands for Post Traumatic Stress Disorder. But almost is my lawyer who says: “Don’t talk about it. Direct all questions to me.” HA! First of all, I don’t want anyone bothering her/him, and second, it would be on my dime. That part of my brain is still with me.

So let’s talk about Trump. Everyone else is. I’ve watched the debates — excellent examples of Americans yelling at, and over, each other. I’ve read the columns, laughed at the jokes, and Trump’s on-line “book reviews”. Still I’ve been Beyond Uneasy. Then I read Elizabeth Renzetti’s October 22 column in the Globe & Mail. All of the obscure pieces of information meandering around in my head coalesced. Over a year’s worth of bits fell together and that noise you hear is *the bubble wrap* sliding off my brain.

“A popular (if apocryphal) quote by Margaret Atwood goes something like this: Men are afraid women will laugh at them, and women are afraid men will kill them. This week I appeared alongside Ms. Atwood at a fundraising breakfast for the feminist advocacy group LEAF.

In her keynote address, which was very funny, Ms. Atwood talked about the staggering levels of sexism at work in the American presidential election, and how she had never intended her 1985 novel The Handmaid’s Tale to be a work of prophecy.

“We’ve had a resurgence of misogyny not seen since the witch trials,” she said. She wondered about the “witch and devil imagery” aimed at Ms. Clinton, and added, ‘Maybe we should rename her Hillary of Arc.’ What else do we call witches? Nasty, of course.”

The witch trials Atwood referred to are the Salem Witch Trials, begun in Salem, Massachusetts on March 1,1692. 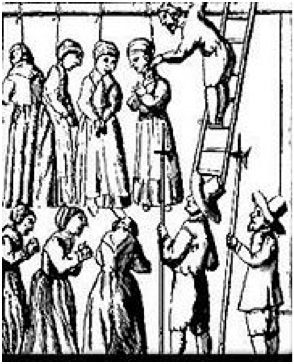 Here’s what the Smithsonian has to say about them:

“19 were hanged on Gallows Hill, a 71-year-old man was pressed to death with heavy stones, several people died in jail and nearly 200 people, overall, had been accused of practicing “the Devil’s magic.” 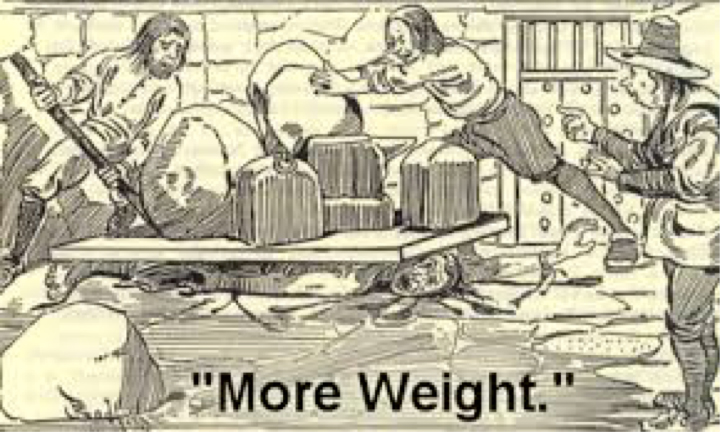 It began with two young Puritan girls throwing things, writhing, (that’s writhing, not writing), and contorting themselves into weird shapes. Screams could be heard. The Salem Puritans blamed The Supernatural for the girls’ fits. Hormones and teenage sexuality weren’t discussion topics in those days. In Salem, many women and a few men, were accused of consorting with the devil. For a long time, mass hysteria and paranoia reigned.

Here, in 2016, a kind of vaporous fog swirled around my brain in the mode of more bubble wrap. The words evil, witches, terror and trepidation kept trying to get my attention. So did an unbending, contemptuous, vengeful white man. Thank you Elizabeth Renzetti and Margaret Atwood, and Donald Trump.

Over 300 years later, in 1953, the American writer Arthur Miller based his play The Crucible on the trials. Canadian Nicole Brooks based her 2015 Obeah Opera from the point of view of a real woman Tituba, enslaved in Africa, taken to the Caribbean and living in Salem during the infamous trials. “Tituba” is considered a “nasty word” in The Islands. And Tituba, the woman, did strange medicinal things with natural stuff foraged from the fields and forests.

The pilgrims didn’t understand what was going on. Blinkered by their fundamentalist religion, and gossip, they let what they were hearing lead to executions. Do you see where I’m going with this?

I didn’t know Arthur Miller, but I am a friend and cohort of Nicole Brooks and I spent a long hard year working on Obeah Opera with Nicole and her fabulous and ‘nasty’, mostly female, cast and crew.

Atwood heard about Obeah and tweeted:

“Witchcraft episode through POV of #black #slaves, as musical theater! This will be wild.”

Then we used the NET to raise funds for Obeah, and Atwood tweeted

It wasn’t happenstance that Atwood was interested. Always researching, I found Diane Carter’s Site on the NET: www.emerycsd.org/webpages/dcarter/salem.cfm?subpage=1143672

“Half-Hanged Mary
This poem is based upon a true story.
‘Half-hanged Mary’ was Mary Webster, who was accused of witchcraft in the 1680’s in a Puritan town in Massachusetts and hanged from a tree – where, according to one of the several surviving accounts, she was left all night. It is known that when she was cut down she was still alive, since she lived for another fourteen years.

One of Mary Webster’s descendants is the now well-known Canadian novelist and poet, Margaret Atwood, who wrote a poem, “Half-Hanged Mary,” (1995) about her notorious ancestor, and one of her most popular novels, The Handmaid’s Tale (1985), is dedicated to her. The poem has also been made into several stage productions and interpretations. Atwood’s poem is in sections, each chronicling an hour of Mary’s hanging from the tree, beginning at 7 at night and concluding at 8 the next morning.”

And here’s what I have to say: To me, Margaret Atwood’s poem sounds the way you might talk to yourself, in your head…or to your pussycat. Quiet and private. Canadian filmmaker, Riel Stone and producer Jordana Aarons recently made a gut-and-heart-wrenching film, “Roped” based on Atwood’s poem. 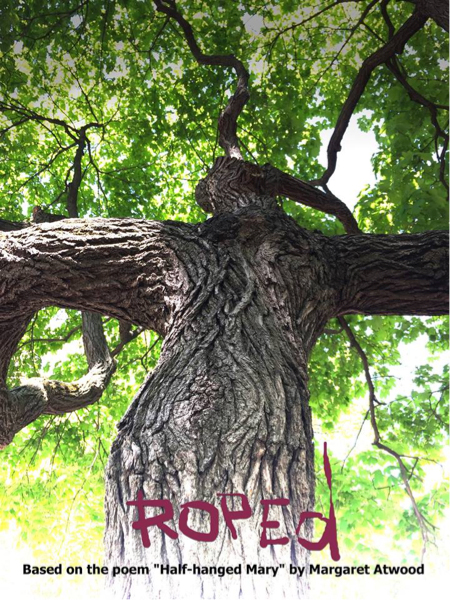 Nicole, Jordana and Riel are all brilliant, talented and stubborn enough to make their Canadian works about events that happened in the United States. And I am a friend of Nicole, Jordana and Riel…of course, sort of closing the circle around my fears of What If Trump Is Elected. Maybe by the time you read this, he’s already elected. Unimaginable. You think?

What in god’s name does all this have to do with Trump? Well, for many years my head was immersed in Salem and witches research. I know Margaret Atwood’s poem Half-Hanged Mary, and I’ve seen Roped. I’ve worked with white male bullies. Add touchy-feely to that, and bombastic, demanding, pushers of alcohol and drugs. And as Diane Carter wrote about Salem:

“(it’s) one of America’s most notorious cases of mass hysteria. It has been used in political rhetoric and popular literature as a vivid cautionary tale about the dangers of isolationism, religious extremism, false accusations, and lapses in due process.”

I equate Trump’s supporters with hate mongering, fear and guns. And the rise of Hitler. Now, it’s been said, not by me, but I’ve heard that Trump studied Nazi films of Hitler’s speeches and copies his body language. I think Trump’s acolytes — those nasty men, and yes women, are Trump’s own homegrown terrorists–whether he wins or not.

Now, think back to the *bubble wrap* reference way up in the second paragraph. It’s from a Globe snippet of Adriana Barton’s Interview with writer Nora McInerny Purmort, Monday, September 26, 2016.

“In the fresh shock of loss…your brain sort of bubble-wraps itself and protects you from all of your feelings and then gives them to you at a later date.”

That’s what the August crash did to my brain and then left me to sit around, to watch, to ponder. Now I’m alert and it’s all added up. Beware the future? Or not? 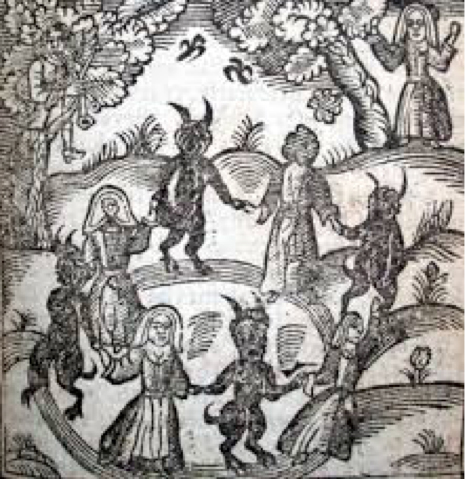 Addendum
I posted about the Obeah Opera twice – July, 2015 and August, 2015
OBEAH OPERA — My blatant plug with a smattering of gossip
So, How Did Obeah Opera do?

“In the 20th century, artists and scientists alike continued to be fascinated by the Salem witch trials. Playwright Arthur Miller resurrected the tale with his 1953 play The Crucible, using the trials as an allegory for the McCarthyism paranoia in the 1950s. Additionally, numerous hypotheses have been devised to explain the strange behavior that occurred in Salem in 1692. One of the most concrete studies, published in Science in 1976 by psychologist Linnda Caporael, blamed the abnormal habits of the accused on the fungus ergot, which can be found in rye, wheat and other cereal grasses. Toxicologists say that eating ergot-contaminated foods can lead to muscle spasms, vomiting, delusions and hallucinations. Also, the fungus thrives in warm and damp climates—not too unlike the swampy meadows in Salem Village, where rye was the staple grain during the spring and summer months.