Trips to the dump

Lumbering is the word used to describe male bears in “The Mammals of Canada” (A.W.F. Banfield) This book also says that a male black bear can weigh up to 270 kg. That’s about the weight of almost 20 raccoons. He was about 35 meters away from us, or the length those 20 raccoons would make standing nose to tail. In other words, too close. I’d heard of bears being described as ursine predators. I stayed in my car.

Bears are the largest terrestrial carnivorous mammals perhaps in the whole world. Carnivorous means flesh eating. How safe does that make you feel with your warm-blooded human baby in your arms? Think you can outrun that smooth-trotting bear? Want to try and distract him? Of course bears and garbage have always been a topic of conversation in the north.

Before ecology, ethics, morals and animal rights, there was safety. That meant the Dump Meister got the bears, if you get my meaning.

The once small valley we local residents now call “The Dump”, was marked “Landfill” for a while, then it was “Waste Disposal Site”. Later, “Transfer Station”. Even later, “Recycling Depot”. Our friend Kevin calls it “The Mall”.

When the original valley was stuffed with garbage, it was bull dozed over. Now large metal containers sit in rows, along with two dumpsters. 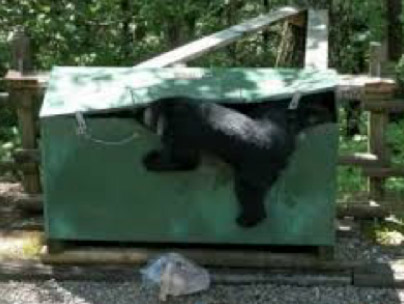 But enough of bears. This is cottage country and we are in the dump. Old boats, stoves, windows–you-name-it-junk — sit in sorted, sliding heaps. When I cleaned my parent’s 1950s Sputnik light fixture, the brass turned to rust, and after a year or two I admitted–time for the dump. But which pile? Electrical? Metal? Small Appliances? I’d ask someone official. I drove past the wood heap.

Whoa. What was that I just saw? I backed up, got out and inspected a set of Victorian dining chairs that were on display. Knowing no shame, there in the dump, I sat on each chair to make sure it was as sturdy as it looked. Two of the chairs had arms and webbed backs. I put those into my car, then, overcome, I headed to the four matching side chairs.

Over ambled the Waste Disposal Site Manager. “Gonna take all of them?”

“Yup. They just got delivered.” (It really is The Mall.)

I managed to get the six awkward, sort of ugly, chairs into my car. “I can’t believe I’m doing this.” Mutter-mutter. The finish on the wooden chairs was dark and streaky. The upholstery was some kind of green and greasy brocade. “I really can’t believe I’m doing this.” But the chairs also have spindles of perfect wooden balls and turned legs trimmed with sweet little carvings. “I am my father’s daughter.”

Cottage people are divided into two camps: those who only see six chairs that they’ll have to take back to the dump; and, connoisseurs who know a good score when they see it. Or six of them.

“I’ll paint them white. And recover them.” This later became known as Barbara’s Vision in the Dump.

Someone had written on the underside of the first chair — “L.Hind – 1958 refinished and trimmed 1968-1969.” L. Hind had used 25 screws to attach the bottom of one chair. By the time L.Hind got to the last chair, there were only six screws. An average of fifty-six tacks a chair held the upholstery down. No wonder it took L.Hind two years to refinish the set. (“Finished July, 1969” was on the underside of another chair.)

Bonus Dump Points. Under the upholstery on one chair, L.Hind had placed a mint condition Time Magazine circa July, 1969. Prince Charles was on the cover. The Time Magazine was full of photos because Charles was about to turn 18 and become the Prince of Wales. Would his mother ever step down? The weekend I found the magazine, was the anniversary weekend of Charles’ investiture.

Over the summer I painted spindles, tiny wooden balls, and 24 legs, made six cushions and turned the chairs into, well, a vision.

A Miraculous Vision that lights the kitchen. 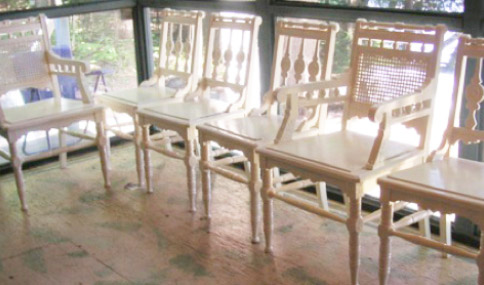 Indeed I am my father’s daughter. And the dump is still the dump. The bears are back.

You can’t get out of being called to jury duty. The court system uses the tax rolls to get you into their jury pool. That’s a huge room in the Ontario courthouse on University Avenue just up from Queen Street. Almost everyone shows up brandishing an excuse not to serve. From what I saw only the dreadfully ill, young people running their families’ grocery stores and anyone who couldn’t understand English or French were ever allowed to leave. Prancing business types had to stay with the remaining couple hundred of us.

I sat in the midst of women from a variety of south Asian countries. I had a good icebreaker of a line. My grandfather, Len Roos, was an early Canadian cameraman. I mean circa 1915 that’s how early. Len belonged to the American Society of Photographers in Los Angeles where I was allowed to see his ASC file. He’d spent time in the Far East and I found his publicity photos from Bali and read introductory letters from Kings and Princes of Siam and Bali. So loaded with exotic history, I turned to the ladies and mentioned his business in Singapore. Wouldn’t you know it, the woman right beside me came from Singapore. She said back in the 1920s, Len would have been a big shot, feted and “looked after” – he being white. “Raffle’s Hotel” was batted around.

We ladies jumped to food and international recipes. I said that my mother, my daughter and I all loved bean sprouts…raw. I gave my three-year-old hands full of raw sprouts. Did I wash them first? No, should I? Well, turns out I’m lucky we’re still alive.

This Jury Duty took place in pre-cell phone days, so there were many, real, “in the moment” conversations around us. People talking to people. No screens involved. The best conversation was between the-Rural-Canadian-Know-It-All-in-a-Plaid-Shirt, and a tiny lady from a far away country. The lady admitted she had never been up north and was terrified of bears.

“Not a problem,” said the man, puffing himself up. “Just take your shirt off and throw it at the bear. Stop him dead in his tracks ‘cause your shirt will have an unfamiliar smell on it…yours.”

I still think of that lady who was afraid of bears. I hope she’s still alive. 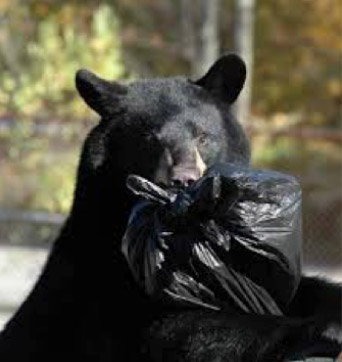