To put this into perspective… these are not cute little monkeys like our famous Ikea monkey. According to the African Wildlife Foundation, there are five species of baboons. To me, it looks like Judy had an Olive baboon (Papio anubis) in her kitchen. Their jaws are described as powerful, and they have sharp canine teeth about an inch and a half long. There was only one baboon in the house, but a troop can be as many as 300 animals…and they do travel in troops.

The good news? Baboons sleep, feed, and socialize in groups of only about 50. Yes, 50 is a big number, but not as big as 300. Oh yea, baboons can weigh up to 100 pounds which means 50 Olive baboons could weigh 5,000 pounds, but 300 baboons could come in at 30,000 pounds. But hey, not to worry, unlike other monkeys, baboons don’t have the kind of tails that can grip things.

So, how’d the baboon make it up to the floor where Judy’s kitchen and bedroom are?

The exterior of the house was being painted. The painters had left their ladders up. No problem for an adaptable baboon that may be smarter than the painters.

Surprise. The baboons returned the next year. The foraging had been good in that house. They’d helped themselves to a load of mangoes left in the cupboard to ripen. What baboon wouldn’t return?

This time, one of the baboons kept to the second floor terrace. There was still a drought up in the wilder South African hills and the baboons were being forced into populated areas looking for water. And here was a convenient carafe of it.

She was able to fling a bunch of green grapes onto the terrace (those green grapes again) and that’s where he settled.

He liked the grapes. This is a boy baboon. How’d I know? … take your time and have a closer look. 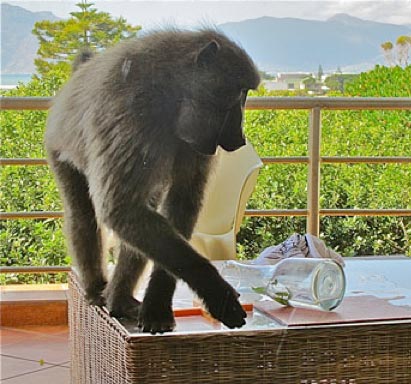 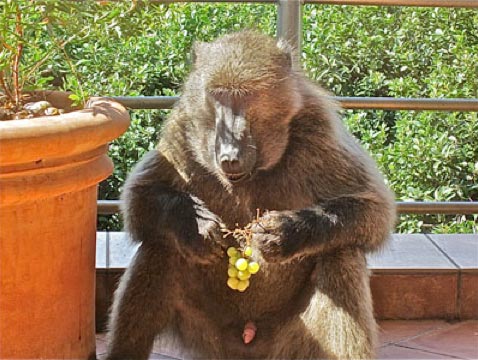 Judy lives here in Canada but avoids our winters…so, another year, another warm winter holiday in South Africa. Andrew, Judy’s South African husband, decided to buy a car there…using cash. It turns out you don’t do that in South Africa. He took the money out of his bank, put it into a paper bag, and stashed that under Judy’s car seat. Without even a cursory look around, they drove off to Andrew’s sister in Cape Town’s suburbs. Surprise-surprise. Again.
Judy and Andrew were followed until their car could be cornered on a quiet suburban street. The only evidence of anyone in the area was a gardener slowly mowing a lawn down the way. Two men jumped out of the Bad-Guys’ car, quickly opened Andrew’s door and dragged him out. Things scaled up a bit. Judy was still inside the car yelling that Andrew was recovering from a heart attack. The gardener mowed on.

Judy continued to flap around screaming inside the car. One of the robbers, now armed, fired a shot to scare Judy, or maybe to shut her up. It didn’t work. The bullet bounced off something metal inside the car and a spark from the ricocheting bullet set Judy’s skirt on fire.

Mayhem. It was mayhem. The robbers gave up and took off. Judy put out the small fire in her skirt. To prove she’s a real trooper — she had not given the robbers the brown paper bag of money. So everything was OK. Right.

Judy and her husband feel the time will come when they’ll just have to walk away from their house and everything in South Africa. What happened to the gardener? Who knows. It’s callous, but you keep your head down especially if you’re not in your own neighbourhood.

The real lost roommate is Karen (whose name I’ve just changed). Karen is South African as were another two of the five young women I shared a flat with in London, England, during the 1960s. Back then, White South Africans expected Black people to vacate sidewalks for them. The rest of us obeyed the South African boycott – no Granny Smith apples. We five lived an uneasy truce. There were so many subjects we avoided, we barely spoke. I still hesitate to buy South African wine. 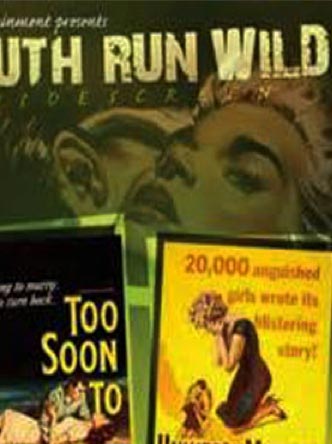 Bed space in our small but expensive flat fluctuated, and near the end of my stay, Karen arrived to take up the slack. She was direct from South Africa. Karen was smarter and prettier than our two other South African roommates. Immediately, she was involved with one of the Canadian guys who passed through our flat on a regular basis.

It all happened so quickly. Karen became pregnant, the guy headed home to Canada, and his mom. Karen decided to have an abortion (illegal). Then, the guy phoned and convinced Karen to join him in Canada and they’d get married.

Karen arrived in Toronto. His Mom was not thrilled. So the Mom found a rooming house for Karen, dumped her there and the guy ended the engagement. Way too late for an abortion.

Karen was pregnant and alone in another strange city. Uptight Toronto. We got in touch and hung out together. I took Karen to my parents for dinner a few times. The Canadian guy and his Mom put Karen into a far off Home for Unwed Mothers in east-end Toronto. Karen delivered her baby in a Scarborough hospital. The good-for-nothing guy lived in the west end – the other side of the city.

I visited Karen in the hospital and met the little baby boy. The guy, the shit, the father, made immediate adoption impossible. He refused to sign any papers or forms proving he was healthy, and indeed the father. I think some nuns in the hospital leaned on him, because he eventually signed.

Drinking and shopping hours had changed in Toronto, but my parents still lived in the same house. They were easy to find. My mother gave my phone number to Karen and that’s how she ended up in our tiny, but baboon-free, downtown Toronto back garden.

Karen began by telling us about the horrific robbery in her husband’s South African office (workers locked in the walk-in safe, guns, but no one killed), and the many times she’d been followed by dubious vehicles to her gated home. Her husband would come out to meet her and walk her into their enclosure. But really, do come and visit.

Her friends in South Africa were convinced that their grown children would all move to North America and that’s what brought Karen and her husband to Canada. They were checking out Victoria and Toronto.

Well it wasn’t exactly the reason why Karen was in Toronto. We went to have coffee – alone. Karen had been an unsophisticated country girl when she arrived in London. And when she returned to her small South African town, she told no one about the baby. Not her female friends, not her mother, and certainly not her husband.

This was the first time she’d talked about it, ever, out loud. The baby was now in his forties. Did I know where the father was? No. I’d always wondered where the baby was.

Karen began to cry, for the first time she said, and couldn’t stop. How could she have kept that secret for so long? Just how rigid and unforgiving were the people around her? Probably about the same as anyone in a small town, or in rural isolation, even urban isolation, anywhere in the world.

I made some calls about the father. No one knew where “The Shit” was.
I’ve lost Karen’s e-mail address – and her married name.

“Probably for the best, dear,” the Shit’s Mom would have said.

Karen and the baby are not made up characters in a fraught story.
Nor are Judy and Andrew. They are all real people with strong, very strong ties to South Africa. Where, and how, will it all end? I wouldn’t put my money on peacefully.