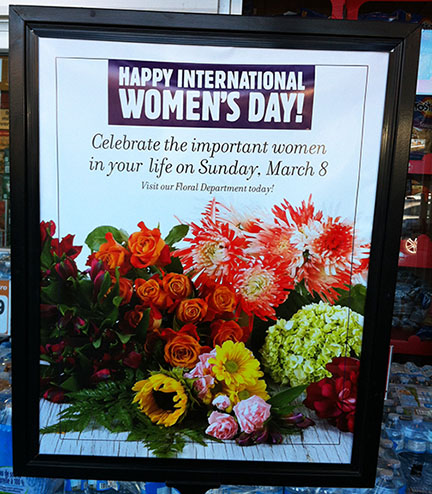 Hello someone there in Metro. As you already know today is International Women’s Day. I saw your sign when I went grocery shopping this morning.

Your use of International Women’s Day to sell flowers is offensive. It’s not a greeting card holiday.

The United States Justice Department released information concerning their investigation into what has been happening in Ferguson, Missouri. At last.

So for all you people who were, or are, sceptical when I talk about the racism I saw while working in African American churches…I told you so. Lift your heads up out of the sand. And don’t dismiss what Canada still does to our aboriginal people.

And who were those white guys wearing police vests and helmets with their dirty well-worn old jeans and sneakers pointing their guns at the black woman on the ground. Have a look at the photo on page A3 of the Globe and Mail, Thursday 5, March, 2015.

A couple of years ago, I travelled to the American south working on a documentary series about African American Churches. I especially looked forward to our five churches in Savannah, Georgia.

The city sounds just great in their brochures. But Savannah has a pretend surface. It’s one big historic landmark, with about 1100 designated buildings protected from demolition. I think they used a colour chart to co-ordinate the paint on all the old houses. And sure, those amazing squares are rimmed with hedges of blowsy flowering azaleas and hanging moss. “Very pretty…very pretty,” said the visitor.

But don’t be taken in, look closer. The building used for auctions of human beings in the 1800s borders one of these grassy squares. Right beside that square, sits The First African Baptist Church. It pulls the back story together. First African owns the nondescript auction building that isn’t on my tourist map. The church is and it’s exploited, knowingly, by the pastor.