Inappropriately Dressed for the Occasion

The last time I saw a hooker in our back lane, she was trying her everything to satisfy a male client. They were in the open parking space across from our garage. I don’t know if it’s a comment on the hooker or me, but it was boring and I didn’t bother watching. It was still winter and she was dressed, or undressed, in something inappropriate for the cold weather part of this occasion. She was doing no harm but she was an undesirable element. Off with her head. The Queen of Hearts would have had a field day in this part of Toronto, circa 1984.

My neighbourhood, Trinity Bellwoods, has changed since then. Hookers and condoms are seldom seen and the needles have disappeared. Here’s how I now orient our house to strangers: “It’s near Trinity Bellwoods Park.” When we first moved here, I said: “You know 999? The Looney Bin on Queen Street? We’re just up the street, on Shaw.” (I’ve given myself permission to use Looney Bin here because I’m describing the historical vernacular.)

Way, way back–around 1845–Shaw Street stopped at Queen Street West. The Province of Ontario owned 50 acres of farmland south of Queen, and that’s where they built the Provincial Lunatic Asylum–the anchor of our community, or the elephant in the living room. 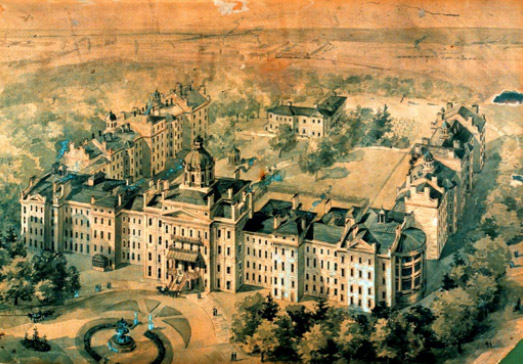 This pretty Victorian watercolour doesn’t do the building justice. It was dark and it loomed. Moans could be heard over the sounds of old creaking wooden floors as you walked the corridors, from one locked door to the next. Patients stared you down, some plucked at your sleeve. I know, because I had a tour of the original building when I was writing a fund raising brochure.

A brick wall taller than the average man surrounded the property. Over the years, bits of the wall have been removed, replaced, removed again, and mostly destroyed. Patients built the first wall as part of their moral treatment therapy. The wall is now touted as an example of the patients’ creativity, and unpaid slave labour. The bits of the remaining wall are designated by the City of Toronto as heritage property. For whatever that’s worth.

In the 1970s, the Victorian Asylum came down and replacement buildings went up. The words asylum and loony bin fell out of favour when political correctness clawed its way into Trinity Bellwoods. The address of the mental hospital at that time was 999 Queen Street West and nine-ninety-nine (999) became the common name. Ahhh, the stigma. It didn’t go away. Presumably that’s why, the new building became 1001 Queen Street West–the next street number to the west,. And the building’s common name became one-thousand-and-one (1001). Well that’s the belief in the neighbourhood.

The door of the new building looked straight up Ossington Avenue and that made it easy for a man-with-a-mission to drive his car straight down Ossington and through the glass of the mental health hospital’s doors and into the lobby. The man had come to save his mother who was a patient there. It did not go well for the man, and I presume for his mother either. The front walkway to the building became a repository for huge concrete standards like the ones protecting the American Embassy on University Avenue.

There was a floor in 1001 where prisoners were sent for assessment to determine if they might be criminally insane. That’s where I went with a small documentary film crew to interview a young man charged with assault. It was either his 18th charge, or he had used an 18-inch two-by-four to smash in someone’s head, or he’d hit someone 18 times with a two-by-four. I’ve tried to forget the details–and it’s worked. The hospital psychiatrist with us said the young man was probably a psychopath.

To feel anything at all, the man repeatedly burned himself with cigarettes and his arms were covered with scabby circles. We filmed the young man in the hospital’s gym where he pounded the punching bag until his scabs broke, his cigarette burns bled and I had to leave the room. (The criminally insane defence didn’t work and the young man went to jail.)

Looking after the mentally ill has changed. Now it looks as if it’s medicate and out the door into the community’s open arms. Many patients ride the TTC as far away as North Toronto. I know–I’ve recognized them there. But twenty-one lucky ex-patients live a few houses up our street in the House of Compassion.

In 1914 our house sat in a treeless suburb. Three row houses were built just a house away and they, along with the rest of the suburb, went through wave after wave of immigrants: Brits, Jews fleeing pogroms, Russians deserting armies, Ukrainians, Hungarians and Poles escaping communism. When we arrived in the early 1980s, large Portuguese families filled the old rooming houses with a smattering of every group before them, plus the most recent arrivals—the Vietnamese.

Our next-door neighbors were Polish and relatives of the families next to them in those three row houses. A little piece of Poland. All the children are Canadian. The mother, Monica, ruled from her porch. A big brassy blonde, Monica had a voice she boomeranged up and down the street. Naughty English words were her friends and she referred to us as The English.

In contrast, Monica’s son’s girlfriend, who lived with them, was a skinny little piece of muscle. And the son loved muscle–especially his muscle car. He couldn’t keep his hands off it. Paint this, rub that, polish here, poke there. When the son and his girlfriend fought, he retreated to his non-judgmental car in the back lane. Then they had The Big Fight. He sought solace from his car. But soon came the clickity-clack of his girlfriend’s sling back high heels as she headed for the lane. When she got to his car, she reached up–and ground her lit cigarette into the car’s new paint job. Ingenious.

Our Polish neighbors began to move, or die (some were very old). One by one, the three row houses were bought by a Baptist group and the whole row miraculously became The House of Compassion. We neighbours were told the House of Compassion was a home for 21 older single adults coming out of hospital. At first there was a bit of NIMBY when the single adults turned out to be former mental patients. Ha! They blended right in. Most of us had bought in the area because of its diversity and active family life—and the tolerance for eccentricities.

One middle-aged man from The House didn’t wear shoes. We called him Socks. Up and down the sidewalk he walked, in his socks, writing in a notebook. We asked the home administrator about Socks. “Ahh that would be Our Jeffery.” He’d been an economist and obsessively wrote down license plate numbers. And now many years later, he still does. And he wears shoes. We call him Our Jeffery, a more fitting name than Socks. He suffers from Schizophrenia.

Then there was The Cougher. She smoked…cigarette papers. Think of a medieval witch with layers of long ratty black clothes wafting around her. A peaked ball cap thing with black desert storm flaps kept her face in total shadow and her hair askew.

I work at my front window–it frames my world. One day The Cougher stomped passed two immaculately dressed Portuguese women who looked to be in their twenties. As soon as The Cougher was behind their backs, both women each made the sign of the cross. Maybe even made it twice just to be sure. Creepy. Not everyone likes eccentrics.

On another day, The Cougher sat hacking in her black getup. She was on the park bench beside the sidewalk, across from my window. She was outside the school grounds–hat’s important. Within minutes, two young policemen appeared and gave her a hard time. The Cougher waved her arms and looked frightened. So I went out and interfered.

The cops were, well, really pissed off—they had heard a weird woman was smoking marijuana on school property. “No,” I said. “She’d faced away from the school, was on that public bench and she was smoking cigarette papers.” So there.

She couldn’t do that. Children could see her. Yes, the police understood the bench wasn’t on school property. But she had no I.D. “She has me and I’m telling you she lives in that house across the street, The House of Compassion.” They officiously walked her home.

Years later, I saw The Cougher walking along Shaw Street, quietly holding hands with a man equally quiet. She wasn’t coughing and she was dressed in twenty-first century clothing. It made me smile. Her stay in the House of Compassion had disturbed no one—except the young police officers who felt that dressing like a witch and smoking paper was inappropriate for the edge of a schoolyard.

It was, as they say in the education business, a teaching opportunity. But I held my tongue. Where were the police when the hookers worked our lane, when the drug dealers staked out the local community centre doors and frightened moms and tots away from their swimming lessons. And what about the local “boys” who used baseball bats to go after gays in our parks? And don’t forget the teenage sister of two of those boys. What did she do with that gun—how did she get it? Was it ever found? Did the boys ever do jail time for breaking into the Roots Warehouse?

Eventually, the school and the neighbourhood had enough of the hookers and drug dealers doing business on the school’s grassy playground. Someone in the know had the timer for the in-ground sprinkler system set to go on and off sporadically throughout the night. That worked. The arts group, Artscape, turned the deserted warehouse at the end of our lane into a live/work building for artists. Those artists figured out legal ways to drive the hookers, dealers and general sleazes out. They’ve made a community garden complete with a bee-hive. Save the Dying Bees. Artists are what turned our area around.

Now the former Lunatic Asylum has been renamed yet again. CAMh (stet). That stands for Centre for Addiction and Mental Health. It’s being rebuilt into an “urban village” complete with a First Nations sweat lodge. It’s not going away. Nor is the House of Compassion. The sidewalks are clogged with young parents and their super-sonic, doublewide strollers complete with cup holders and WiFi. Coffee Cafes have pushed out the Vietnamese fruit and veg stores. You can’t park and none of us can afford the trendy restaurants. To us, the area’s cycle may be on a downward trend. Hope not.