The Pastor Known as Little Stuff

Before she was a pastor, Veronice Horne was a homeless alcoholic turning tricks in the streets in her first life. When I met her all I could think was “I want to be her when I grow up.”

A few years ago, I was working on a television documentary series called Divine Restoration about African American churches. I am a white, spectacularly secular producer and Ian Burns, the producer I was with, is also white. We were scouting churches in Newark, New Jersey—a desperate city like Baltimore as it’s portrayed in the TV series The Wire. The 1967 Newark riots were responsible for most of Newark’s poverty even today. The flight of industries and the middle class out of the gritty city didn’t help.

Ian and I always looked for a church that needed a small renovation, one that could be carried out by the church congregation. Our only proviso was the finished product had to help and serve the community. Oh yes, and make our tight production deadline.

Bill, our researcher, e-mailed a weird possibility: “I know you’re thinking…’Bill, this is crazy you’re recommending a church without a building.’ My gut tells me this is a good one.”

Pastor Veronice Horne runs her “church” out of her home in an area where white folks don’t get out of their car. Her husband stood watch over our rental car while Ian and I went inside. A 6’2” white guy, Ian, is in charge of the building part of the series. Pastor Horne is about half his height. OK, she’s not three feet tall—she’s maybe five. She could gain on the height if she grew her close-cropped grey hair. Veronice is a human pogo stick full of joy, hugs…and determination—in the Machiavellian sense of the word.

“At the age of 15, I took my first alcoholic drink. I ran away from home and I lived in the streets, and for 10 years that’s what I did—drinking, prostitution, sleeping in cars, eating what I could steal, bar-hopping because you could always pick up a man in a bar. Guys knew I had a blade—I knifed a guy – had to be stitched. I’m little.”

Let’s stop here and talk about Jesus and God. Be a grown-up and substitute whatever words you want. We were a motley crew of every persuasion and we no doubt looked like a group in need of a little religion. But no one tried to convert us, or even instil any type of missing belief system. So, you reading this, suspend your disbelief and give Pastor Horne your full attention so you’ll see and appreciate what this tiny, black lady from the south accomplishes.

Forty years ago Pastor Horne found Jesus when she dropped into Newark’s Goodwill Centre for a free meal. “I went in…and what I felt was so much love, so much love coming from people who didn’t know me,” she says. It turned her life around. She got a job, went back to high school, married, bought a car – the American dream.

When Pastor was plain Veronice Horne, she put her life on the line again. She took early retirement to work with women living in the streets of the urban hell of Newark. Seven years ago, Veronice founded “In The Hands of a Woman Ministry Inc. A Hand up for Hurting Women & Homeless Women”—that’s what it says on her fluorescent green t-shirt.

Veronice distributes food from her car in deepest Newark. She has a weekly women’s lunch in the Goodwill building where she gives the ladies toiletries and new clothing if they’re in the job market. And let’s be straight: Pastor Horne has them Testify first. Jesus and God saved her and Pastor Horne has saved many souls herself. If Pastor Horne thinks you can be saved, then by God, literally, she’s going to save you.

Michelle DeLaCruz, a tall forbidding woman, told me her Pastor Horne story:
“When I met her I was dressing in minimal clothing. This older woman lived in my building and every time I saw her: ‘When you comin’ to church?’

‘Yea,’ I’d say just to get her out my face. Got so bad, every time I walked outa the elevator, I had to ask people ‘Is that little church lady out there?’ ‘Cause she would come out of nowhere, like God just sent her to me. I’d be half-way out the elevator and here comes the little stuff round the corner ‘how ya doing Michelle?’ I guess she saw something in me that I couldn’t see. She kept at it because the tenants warned her not to say too much to me — I had a mouth like a cellar.”

Now Michelle is off the streets, clean of drugs and alcohol, and married last year. She has her Masters degree and is working on her PhD in clinical psychology. “Pastor Horne has a discernment not only as a pastor but as a mother and you can’t help love her,” said Michelle.

To me, Pastor Horne’s experience as a mother was horrific. “My daughter died at 38–suddenly got sick — three weeks later she was gone. I just picked myself up. The Lord took my daughter but He gave me so many others. I tell the girls ‘The love I had for my daughter – I can just embrace you and put it all out there. It’s all about love. That’s what it is.’”

Ian was magnificent in our scout meeting with the Goodwill brass. Pastor Horne had a plan to get a space in the Goodwill building where we met the next day. Veronice sat through the meeting, her wrinkle-free face beaming, not saying a word, while Ian pitched the white Man-In-Charge. Goodwill wanted a brownstone renovated. No way–too big. Ian at his charming businessman best, explained Veronice’s project as if it was all his own idea.

Clever Veronice. She’d primed Ian and I without us even realizing. After Bill’s phone interview with Veronice, she’d scouted the Goodwill building and found a room not being used. Well not being used to overflow capacity, the way Veronice felt it should be, and she could do that. Goodwill approved her plan.

Then I had to convince our two broadcasters. “This is a tricky show because Pastor Horne really is the church and we’ve never had a talking church before. Pastor Horne carries her church in her heart.” I got that line because Veronice kept thumping her heart and talking of love and warm, good stuff. “There’s a glow about her,” one of her saved ladies said.

We got the green light. Veronice shouted and danced on the spot. “Twenty-five years carrying this baby but now she’s at the birth.”

I don’t think Pastor Horne slept during our three-day shoot. Our young sleepy soundman kept muttering, “I can’t believe she’s 67.” Veronice scurries. Hugs. Laughs. Requests. You can’t say no to Pastor Horne. She insisted we tape her singing a song she’d written. What a voice—Tina Turner goes to church.

For our first Sunday, Pastor Horn borrowed an actual church, originally Swedish, in nearby Montclair, New Jersey. The Hands of a Woman congregation was bussed in, filled the pews, and bussed back to Inner Newark. It was a very staid service.

But the following Sunday, was our show-and-tell service held in the Goodwill auditorium. It was the time to reveal the congregation’s work in their new permanent home. Pastor Horne whipped a tambourine around as she shouted out halleluiah, praised the Lord, sang, and did her little jig of a dance. The service rocked—even me, white-girl, got up and sort of moved.

My notes to our video editor read: “Think of Pastor Horne as a Mick Jaguar and Beyoncé clone—after Veronice comes on stage, she’s all you want to see. Please try to work in her band’s short solos. But remember it is Veronice Horne who carries the church in her heart.”

Have I grown up to be Pastor Veronice Horne? A bit. And that’s with knowing that Veronice isn’t a total saint. She wrote the lyrics to her song, but Veronice used someone else’s music and no one would cough up money to pay the copyright fee. We couldn’t put it into our Hands of a Woman show. Veronice singing her song would move the heart of a heartless cynic, and it all came down to money.
Then the Broadcaster began insisting we feature rich churches that need no help, but do have congregations who can grease wheels. Stop. I had done enough for the broadcasters and it was no longer the series I’d joined. I quit. Kind of a Veronice move. 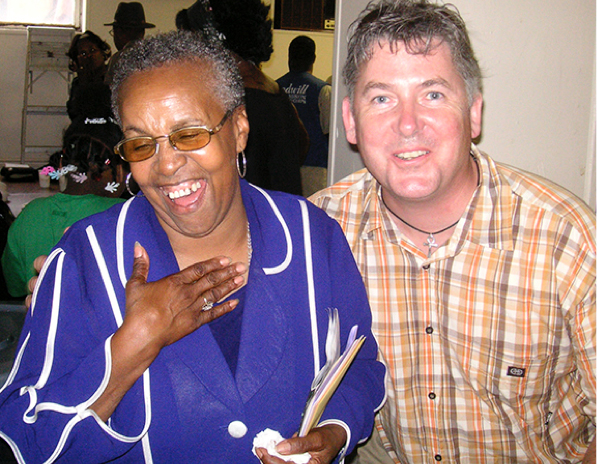