Leonard Cohen died a week or so ago. I read about it online, around 3:30 am the night Trump became President-Elect. This is from Cohen’s song Democracy:

You may have seen Mary Pratt’s “Red Current Jelly (1972)” on display in the National Gallery of Canada in Ottawa. 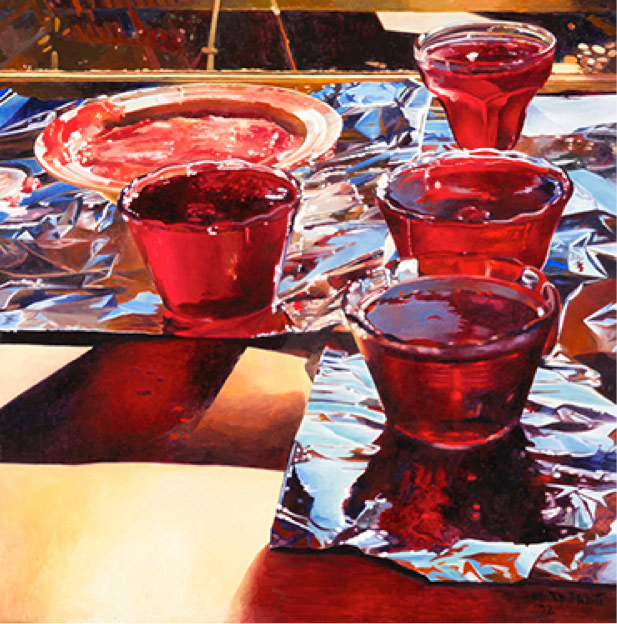 Mary has painted other jellies but they are cleaned up with the jars wiped clean. This painting gives you the sticky messiness of jelly making. There’s going to be no bitchin’ here.

Canadian painter Mary Pratt makes it quite clear how tangled her paintings are with her kitchen, and the food in it – raw, cooked, preserved—even fish heads in the sink. And miles and miles of aluminium foil. The minutiae of women’s lives that we forget to notice.

I began my 600-words about “egg cartons”, with two cartons of eggs I’d taken from my fridge. Both cartons were well past their due dates. So I left the newest carton in case someone wanted to eat eggs and not die, and I broke the eggs left in the older carton.

I put the mostly empty shells back in the carton and remembered Mary Pratt’s painting. (Mary Pratt, Eggs in an Egg Crate, 1975) It’s a painting, but I think in this case, it makes a wonderful illustration. If you know any mouthy artists, you’ve heard many times that paintings and illustrations are not the same. So? This is what I had to work with.

Back to my writing exercise. Zephyr and Umber, our two dogs, love raw egg, that’s why I gave each of them a bowl full of old eggs. The yolks were stiff and the whites swam with blobs of weirdness.

Love it. I hurried to my computer before the muse left me. I wrote my 600-word essay and sent it to the printer. (Always print before walking away. Computers know when you leave the room. That’s when they run out of ink, or paper, or they jam.) I stayed and these pages came out pristine. (Me: win. Printer: lose…so far.)

I took the immaculate sheets to the kitchen for the latest on my personal reward list—a new package of President’s Choice Oatmeal Chocolate Chip Cookies. I slapped my printed (and brilliant) essay onto the counter so I could open the package of cookies sealed to withstand a kitchen-size nuclear bomb…dropped by a drone.

The phone rang. Where was it? It was right where I’d left it – on the sofa in the living room. I grabbed a handful of scattered cookies and made it by the fifth ring. It was a Bell Telephone guy asking me to take part in a survey. This week’s Bell Repair Guy had not only shown up at our house, he was the only Bell person to believe me that my phone static problem was in fact the Bell line from their pole, into our house. I took the survey and gave the Bell Guy a rave review for replacing the 70 to 100 year-old line… I hope Bell rewards him. But what are the chances?

La-de-daw-de-daw, I wandered back into the kitchen, wondering what I’d been doing there in the first place. CRUNCH. I stopped and looked down. Zephyr and Umber tiptoed out of the kitchen. My foot crunched again. Smart me figured it out. Zephyr The Terrier, still sniffed raw eggs. No doubt, she had stared at the counter with unflinching eyes until Umber, the standard poodle, got the message. Front paws on the counter, Umber managed to drag everything from the counter to the floor using his hunting-dog soft mouth.

The dogs ate my homework, Version One, not saved. But nicely printed. That’s why this longer Version Two, is late. (1,583 words, not 600). The dogs really did eat my homework.

Mary Pratt:
I think, with my work, even the things that are ordinary are not ordinary, because I don’t believe that anything is ordinary. I think everything is complex and worthy of conjecture, and worthy of a look — worthy of a close look.

The other day a friend asked me if I’d ever put the unground coffee beans directly into the coffee pot. Don’t be silly. I’m the person who got up one morning, went downstairs and poured the fresh pot of hot coffee into the sugar bowl.

The painting below is not by Mary Pratt but it’s in the theme of her indoor domestic scenes. This is The Milkmaid (1658-1661) by Johannes Vermeer. Rijksmuseum Museum, Amsterdam. 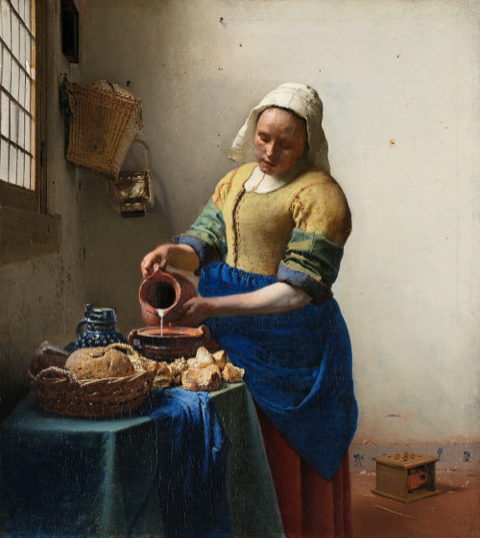 It’s the only painting I found with a woman pouring a liquid—although it’s not coffee, it’s obviously milk. Milk is not big in our household. No one takes milk in either tea or coffee – let alone drink a glass of it. We often run out or it’s sour. You can say the same for a lot of things stored in our fridge. On that particular evening, I decided to make zucchini pancakes with the two zucchinis I found at the back of the fridge.

After 42 years, my Cuisinart gave out and I’d asked for a new one for Christmas. Yea. Well. Cuisinarts have changed and it took me some time to get the blade into the new one so I could shred the withering zucchinis. Pleased to say I didn’t shred any fingers. I was on my way; I figured the rest would be easy.

Eggs were part of this mishap too—and a dog. I broke the very last two eggs in my kitchen into a small soup bowl. I whisked with a fork—while I stood on one foot. Other foot is trying to keep my dog Zephyr away because, as you already know, she loves raw eggs and she knows the sound of them breaking anywhere in our three-story house. Reached into fridge, still on one foot, and poured small amount of milk into the eggs.

The eggs appeared to curdle. My last 2 eggs. I bent over and peered into the small bowl up close (new glasses on order). The milk had separated into chunky globs of yellow. Checked expiry date on milk box. It appears the milk box was, in fact, the orange juice box. What the…! Maniacal laughter. Big sigh. Oh well. Another sigh, and I decided to finish.

Poured more juice in, added Tea-Bisk, mixed all ingredients, divided and fried. Presented the browned, dubious results as Zucchini Pancakes Caribbean Style (from a menu I’d once seen). No one noticed.

I’ll remember that part next time I’m asked to whip up something when the fridge is pretty well empty.

During my early teenage years, I believed everything printed in Seventeen Magazine. I even tried some of their tips – like how to moisturize your hair to silky silkiness.

Here we go again. Take one egg and beat with fork. (No Zephyr the dog, to hold off. Remember this happened when I was a teenager and still lived at home. My mother hated dogs.)

Now you have your egg beaten and you comb the raw mess into your hair, wrap your head in whatever plastic substance they used back then, sit for 15 minutes and hope no one shows up. No one did in those days. Then you take the plastic off and pour some olive oil on your eggy hair. (Do you know where I’m headed with this?)

Then with water as hot as you can stand (to get the oil off), hanging over the kitchen sink, you use the vegetable sprayer to rinse your hair. The oil and egg mixture now has a kind of funny, lumpy texture not unlike that nubby plaster stuff sprayed on ceilings in the 1950s.

The hot water has cooked the egg and oil together, yes cooked, and in many places, cooked the greasy mass together…and attached on to your head here and there. You now have a head covered in blobby yellow plaster with hair inside. It will take many, many, many, many washings before your hair feels, not like silk, but egg-free. You hope. Don’t even think about the texture of straw.

Oh yes, make sure you clean up the kitchen—your mother’s already going to be pissed when she sees your hair.