The sleeping snake behind that rock over there is forcing me to stay in the screened porch at the cottage. I can’t even glance at the thing in case it slithers.

Being inside is OK. I watch puffy clouds of swarming mosquitos on the outside of the screens and tell myself it’s not an especially bad year for mosquitos, in spite of all the rain. But my mosquito bites do seem to be infected. And of course the remaining black flies are still feeding.

I’ve already given up swimming in the lake. Waiting for me under the dock is the-mother-of-all-snapping turtles. Years ago — (before refrigerators) — we left a string of fresh caught fish hanging over the dock into the water. By morning, only the chain remained. Turtles never forget. Did you know that? I live my cottage life as if all the turtles on our lake know our dock.

Speaking of docks and therefore dock spiders…when our lake first opened to cottagers, all old wet stumps were home to big black hairy spiders the size of your hand. Here we are – the innocents that we were – me beside my father who is holding my sister with his foot balanced on the spiders’ log hideout. (See my blog posting for May 31, 2015 — What Got Left Behind for more information and the same photograph.) 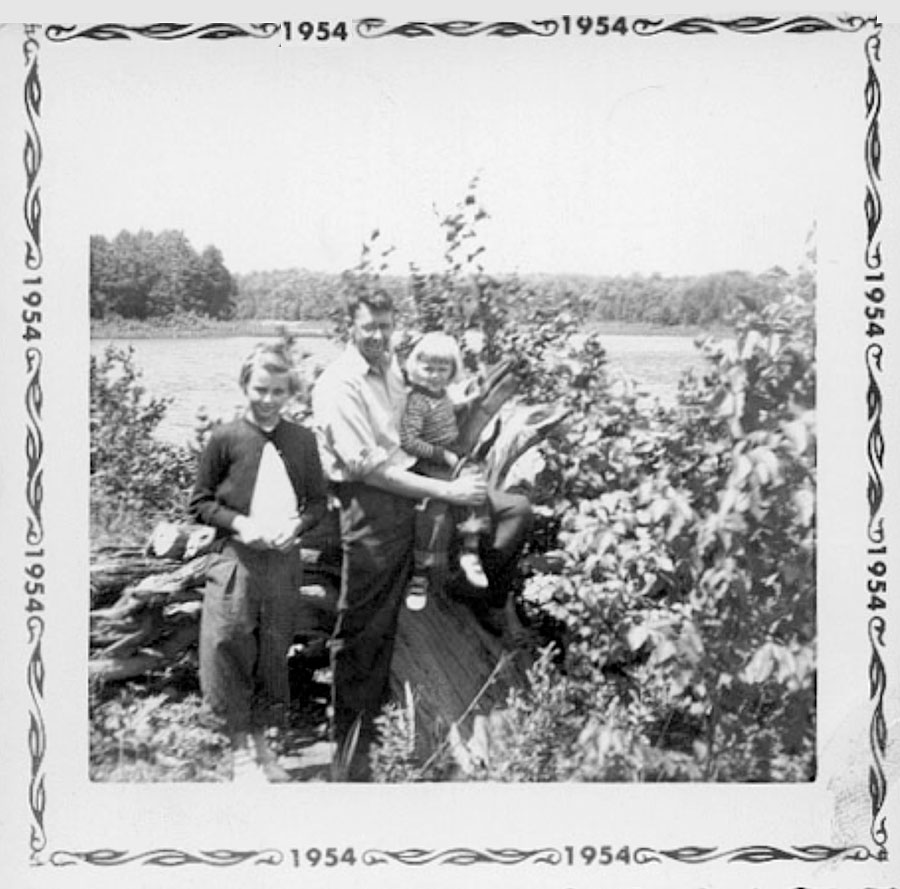 Once I was trapped in our wooden rowboat, out on the water, when one of nature’s larger dock spiders appeared – one hairy black leg at a time — from under a seat. It was difficult to kill that dock spider with the only weapon I had — a long, long oar…in a tippy boat.

My father used to go for an early morning skinny dip in the lake and there he was, naked, with his boy bits hanging down under the water. Also under the water was a loon, fishing.

If you’re ever in the same situation, you’ll be amazed by the size of the loon when you’re that close. It caught neither fish, nor man, and hey look at the size of those feet. (I did not take this picture as in photograph it with a camera. No, I took it from the NET. Thank you whomever.) 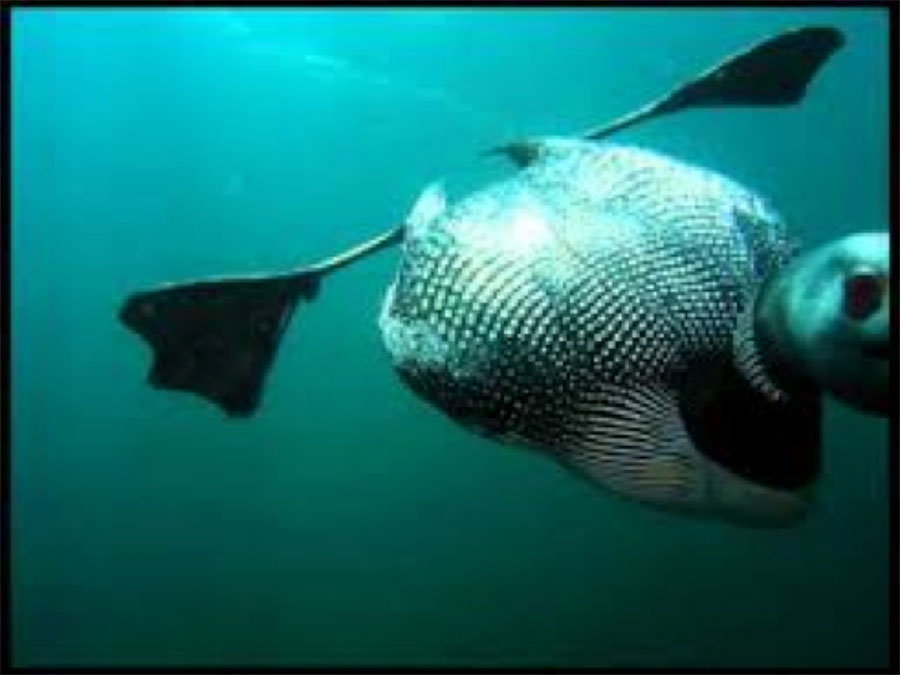 And speaking of fish, every year word goes ‘round the lake: There’s a fisher killing cats and small dogs. The fisher is a member of the weasel family and it looks like the product of interbreeding between a black cat and a dachshund dog. In the last fifty or so years, I’ve seen two fishers near the cottage. They have shiny black fur with a long stretched out body and short legs close to the ground. Fishers are the only animals that can kill a porcupine – other than humans with guns.

So here I sit inside the screened porch with my small dog – hors d’oeuvre for a fisher – but that doesn’t really matter because no longer can I go for a brisk walk on the cottage road up behind us. Not since this year’s larger-than-life bear was seen crossing the road. 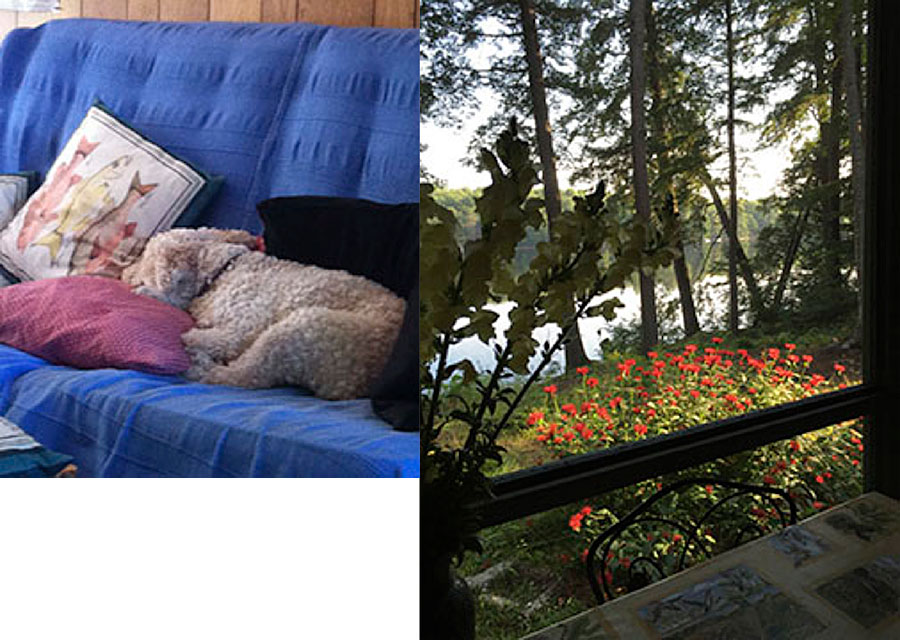 Here are a couple of views from inside the porch. On the left is the guard dog. On the right is the outdoor wilderness. The plant with the red flowers on the other side of the porch screen is Monarda, or Bergamot, or Bee Balm, or Oswego tea. Bergamot is the basis of Earl Grey tea. Call it what you like. When I bought mine on sale in Bobcaygeon, it was the end of the season and the plant was mostly dead. I planted its few spindly spikes about four years ago. Now it’s what gardeners call “rampant” and is the Beaver Lake Hummingbird Café all summer. There are too many hummingbirds to get an accurate count.

I love researching the people who have plants named after them. Nicolás Bautista Monardes (1493 –1588) was a Spanish physician and botanist. The genus Monarda was named for him. (Wikipedia encyclopedia) Monarda is a native North American wildflower species and Nicolás Monardes wrote a famous book with a wonderful title in English, Joyfull Newes out of the New-Found Worlde, London, 1596.

But. Beyond that magnificent clump of Bergamot a-flutter with hummingbirds, is this plant from outer space. Officially it’s called white baneberry. Its common name is Doll’s Eyes and it’s a toxic killer. Eat a couple of those evil berries and your heart stops. And then you die. 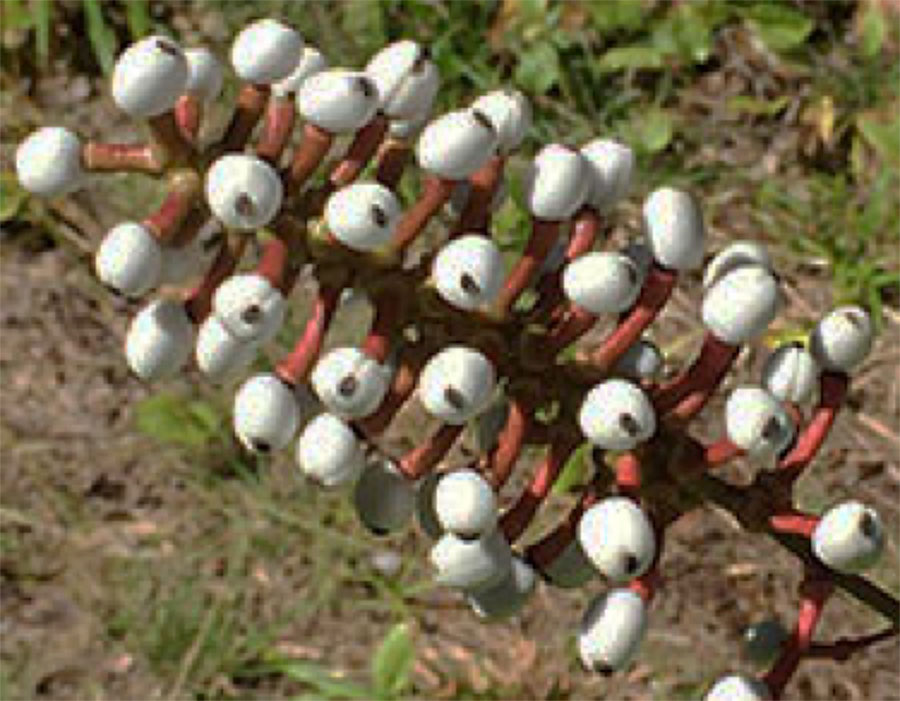 There’s lots of nature at the cottage – if you like that sort of thing. Sometimes it does put on a calming, snake-free show. 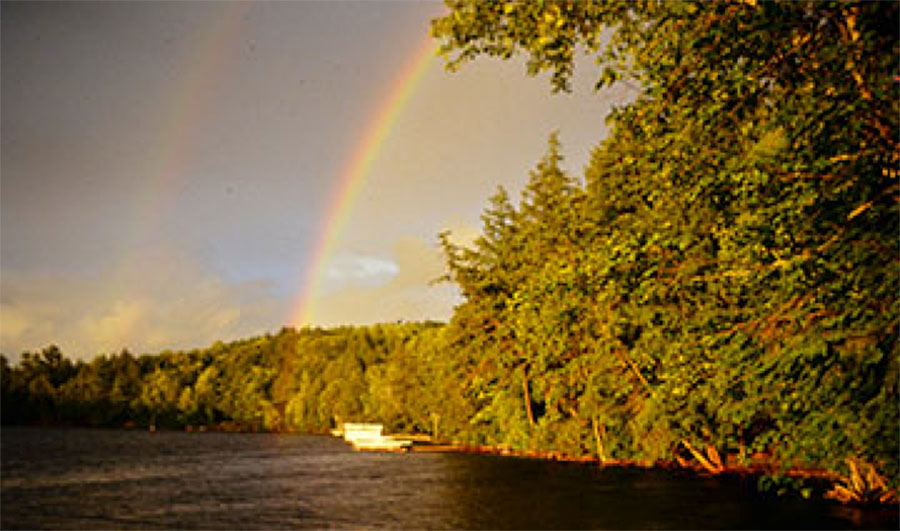